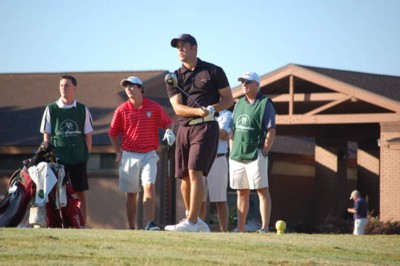 St. Augustine, Florida – (Oct, 24, 2010) – Chris Bray, a senior at Flagler College, won the 2010 St. Augustine Amateur at St. Johns Golf Club with a final round 68 for a total of 206. Bray started the final round in 2nd place, 2 shots behind 36-hole leader Chris Kennedy. Kennedy stretched his lead to four strokes before Bray turned the tide with birdies on #13 and #15 on his way to a back-nine 33.

Bray was awarded the Jennison Cup and gained national ranking points from Golfweek’s amateurgolf.com. The Jennison Cup was named in honor of tournament founder Jay Jennison, who passed away earlier this year. Winning the Jennison Cup holds strong meaning to Bray, who was recruited by and played for Jennison at Flagler his freshman year. “I got to know him as a coach, a mentor, and a friend. I miss him, but I know he was watching me,” Bray said.

Chris Kennedy of Sarasota, a senior at the University of North Florida, finished second with rounds of 68-68-72 for a three-day total of 208. At the awards ceremony, a check for $15,000 was presented to the First Tee of St. Johns County. The First Tee provides young people of all backgrounds an opportunity to develop life-enhancing values such as confidence, perseverance and judgment through golf and character education. Tom Lawrence, Executive Director of the First-Tee local chapter, represented the organization at the Amateur.

“With the help of the Amateur, we plan on impacting the lives of over 1,000 children throughout Northeast Florida this year,” Lawrence said.

University of North Carolina recruit Brandon Dalinka of Newton, Pennsylvania held onto his 3rd place position with 37-36 final round. Dalinka finished with 71-68-73 for a total of 212. Blake Morris of Clearwater Beach, Florida ended the tournament in 4th place with 71-71- 71 for a total of 213. Major Forbess of Jacksonville, Florida finished 5th with 76-69-69 for a total of 214. Forbess is a teammate of Kennedy at UNF.

Duke Butler IV of Ponte Vedra Beach, Florida won the mid-amateur with 73-73-73 for a total of 219. Butler IV is the first mid-amateur to win the mid-amateur division in consecutive years.
Low score of the day came from Bray with his 68, and Forbess had the biggest comeback round, moving up 5 spots.

The tournament is designed for better amateur players and is 54 holes of stroke play. It is played at the St. Johns Golf Club and net proceeds benefit the First Tee of St. Johns County.

About the St. Augustine Amateur

The St. Augustine Amateur is a national event established in 2004 for better amateurs and collegiate players. Played over three days at stroke play, the field this year will be comprised of players from ten different states and seven countries. The winner will receive a replica of our trophy designed by Heritage Creations of Glens Falls, NY.