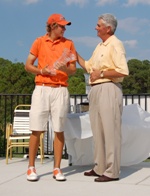 The two finished in a tie at 4 under after Uihlein missed a four-footer on the last hole of regulation play. Uihlein shot a 72 and Valois shot 70 in the final round.

“It was great being able to participate again this year in this event. During the tie-breaker I went in with a positive attitude and just tried to hit the ball well,” said Uihlein.

Local standout, Elliott LaVercombe, finished 3rd at even par 210 after a final round 71. “The wind made it hard to judge which club to use today, but fortunately I had a great caddie in Matt King,” said LaVercombe. King is a participant in the First Tee of St Johns County.

Low scores of the day were returned by Nicholas Mulhaupt and Julian Saari. Both finished with 2 under par 68s.

Uihlein, only 17, is used to competition. He, along with 5th place winner Bank Vongvanij, frequently go head to head as they both attend the David Leadbetter Academy in Bradenton, FL.

This year, the St. Augustine Amateur attracted players from 3 foreign countries, 8 universities and 16 states. With the win, Uihlein will rise from a US Ranking of t62nd to t33rd. Coincidentally, as Runner Up, Valois rose from t50th to t33rd also.